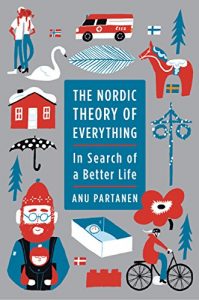 Anu Partanen is a Finnish journalist now living and working in the United States.

In her new book “The Nordic Theory of Everything. In Search of a Better Life” she compares how Nordic/Finnish and American societies address key issues such as healthcare, education, parental leaves, unemployment.

This books hitsÂ close to home. I’m a naturalized Finnish citizen, and spent most of my adult life in Finland and Norway before relocating with family to California.

tl;dr;Â The book is a nuanced, well-argumented critical analysisÂ of the strengths and weaknesses of American and Nordic societies. It debunks the myths that affordable universal healthcare, free quality education, improvement ofÂ women’s participation in economic lifeÂ by providingÂ affordable daycare and paidÂ parental leaves can only be achieved inÂ â€œnanny statesâ€ that discourage individuality.

The Nordic countries demonstrate that building strong public services can create economic growth, and that pooling the risks everyone faces in life – sickness, unemployment, old age, the need to be educated to secure a decent living – into one system funded by everyone is more efficient, and more effective, than each person saving individually to ensure security and survive misfortune, especially in today’s age of global economic uncertainty and competition.

The bookÂ opens with a statement I’m sure many expatriates from the Nordics can relate to.

To leave Finland or any Nordic country behind and settle in America at the beginning of twenty-frst century was to experience an extraordinary – and extraordinary harsh – form of travel back in time.

Even though the book might come across as aÂ particularly harsh criticism of the Unites States to an American reader, one should remember that it is written from a perspective of a Nordic author. And part of the Nordic cultureÂ isÂ being direct and pragmatic.

In a true Nordic tradition, comments on the article about the bookÂ in Finnish daily Helsingin SanomatÂ have been pretty negative. I think it comes from the fact that Anu writes about in her book:

But the reality is that many Finns really have no idea how good they do have it, because they’ve never been on their own as a citizen of a place like the United States.Â Â

There are many things that Finns and citizens of other Nordic countries can and should be proud of – universal health care system, pre-natal care now with world-famous baby-boxes, one of the best in the world school education system.

But mind you, it’s not all moonlight and roses in the Nordics and not all horrible in the United States. The book gives a fair comparison of two systems,Â a food for thought and an inspiration for change.

As Anu concludes and I can very much relate to that:

Having lived in the United States for a while now, I can see more clearly many of America’s strengths, as well as some of the Nordic region’s faults. The Nordic tendency to downplay the unique talents of each person as well as his or her unique pursuit of happiness and success can be petty and disheartening.

Overall, this is a great research and journalistic work, with great attention to detail,Â drawing attention to many controversial (especially as the United States approachÂ elections), yetÂ important topics.

There were a few statements in the book that I felt were not absolutely clear, so I took liberty to go ahead and clarify some of those here.

At least in Finland, while parental leaves are a part of the national policy,Â Â  unions have negotiated deals for mostÂ professions, where employers are responsible for paying salary for as much as 3 months of parental leave.

Employer’s costsÂ are 12,000 – 20,000â‚¬ per newborn, while average national salary is 2800â‚¬. For early-stageÂ and small businesses this can be a substantial cost. Some reports tell that this results in employers hiring young women only on temporary contracts.

Having heard so much about “employer-sponsored health plans”, somehow I’d assumed that they would be cheap, or even practically free, Â for employees – wasn’t that why it was called a “benefit”? […] Later I would research the average cost of employer-sponsored plans in the united States. […] If you looked only at amount the employee had to pay, from his or her own salary, the average annual share was $1,071 for single coverage…

I cannot tell much about Spain, butÂ the price is consistent with that in Finland – if you don’t have Finnish state health insurance (residence-based), the bill is going to be about â‚¬10,000.

Finland’s corporate tax rate is in fact relatively low – 20 percent in 2015 compared with the American rate of 39 percent – and after a company pays its taxes in Finland, it’s done. It doesn’t have to offer its employees health insurance or pension benefits, which both burden American companies with significant costs on top of their taxes.

This is not exactly the case though. While statutory US corporate tax is one of the highest in the world, the effective tax rate paid by US corporationsÂ is much lower due to a number of tax deductions and loopholes. E.g. profitable U.S. corporations paid, on average, an effective federal income tax rate of 14 percent over the period from 2008 to 2012.

Also in Finland companies have to pay health insurance (2.12%), unemployment insurance (1%) and pension contributions (24.6%) for all their employees.Â It’s a lot easier to pay these though. Figuring out pension plans in US requires a lot of work and nobody guarantees you a good result. Here’s a brilliant example – John Oliver shares how he tried to get 401K for his company.

The book is available on Amazon.