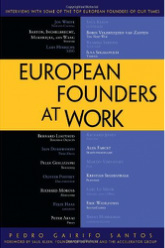 A book by Pedro Santos follows the format of Jessica Livingstone’s “Founders at Work”, offering a series of interviews with the founders of European start-ups.

Entrepreneurs, such as Illya Segalovich (co-founder of Yandex), Loic LeMeur (founder of Seesmic and LeWeb), Peter Arvai (co-founder of Prezi) and many others (see full list on the book’s website: www.europeanfoundersatwork.com) tell about how they started, built, pivoted and drove their businesses to success.

The book gives a unique first-hand perspective on how to grow a successful business from Europe, what is the importance of US market, what are the challenges European start-ups are facing and what are the competitive advantages of being in Europe.

It is an inspiring book, and it is very relevant to European entrepreneurs. While stories of US start-ups quite often start with “we got $N mln in funding and started growing from there”, in Europe it’s more about bootstrapping and building a profit-generating machine. I would definitely recommend it to anyone who is thinking of starting a technology company in Europe or is already running one.

A couple of quotes from the book that I particularly liked:

From interview with Peter Arvai, co-founder of Prezi (company is in the business of SaaS presentation software):

“In my case, and I think I alluded to this if I’ve not said it directly, I’ve been very concerned with not building a company where there’s too much of a feeling that there’s an A and a B team. And naturally you’d think that the A team is in San Francisco. That is the cool place where everyone wants to be. And the B team is in Budapest, this former communist, gray country—and that’s where you outsource people. This is how most people tend to look at the world, and it’s a view that bugs the hell out of me.

And so what can you do as an entrepreneur is to try to work on those preconceptions. So one thing that we do, for example, is a fellowship program. The fellowship program allows Prezi employees to work in the other office and Prezi sponsors the travel and the living costs for the person if this is within, of course, the three-month visa restrictions that are allowed. So this means that people can experience the different places with all of their strengths and weaknesses.

Another thing is, so far we’ve had a semi-annual power week. I don’t know if we will be able to keep this up, but during this week we collect the entire company in one place and so far it’s always been Budapest because that’s always where we’ve had more people. This was probably a very important moment in Prezi history as well.”

Having the head office of HeiaHeia in Helsinki, Finland and R&D in Krasnodar, Russia it takes certain amount of effort not to split into A and B teams, so it’s very interesting to see how other companies with similar setup are addressing the issue.

And a couple of valuable notes on how to go to the US being a European company:

From interview with Jos White, founder of MessageLabs (UK SaaS startup, made $700M exit to Symantec in 2008), now a partner in Notion Capital, VC specializing in B2B SaaS businesses:

“You usually cannot charge as much for your service in the US, so you have to make it up on scale. Initially, US can be a loss leader until you really build up the scale. So we did have more users in the US than anywhere else, but we still had Europe as our largest market in terms of revenue and profit.

…initially we entered the US with a fairly small budget and we just thought we would have a sales team out there and see if we can do it that way. And it just doesn’t work. I think that
in the US you really have to make a full investment into the market. You need to have a fairly autonomous management team. You need to be prepared to look at spending money for some time before delivering any profitability.”

“I wanted to keep an American company because half of our customers are American. And they like to call an American phone number if they have a problem, and they like to mail a check, in dollars, in the mail, to an American address. It’s just the way software business is done in the US.”